Athletes and Their Golf Handicaps

You’ve been asked the question before, “What is your dream foursome?”

For me, I’m picking guys like Cal Ripken and Steve Spurrier. But there are a TON of athletes who play a round here and there just like you or I. The only difference, pro athletes tend to be good at just about everything they get their hands on.

That got us thinking. Who are some of the best non-PGA TOUR players that chose a different path or picked up the game late? Let’s take a look at some of the top golfers you probably never knew could stick it from 200 yards out.

Keeping his handicap in the Chicago area, likely through his 10 year stint with the Bears, Robbie knows how to hit the flat stick. What stands out about his index is the sheer magnitude of difficult golf courses he frequents. While the CDGA does not show the courses he plays, we can see course ratings and slopes in the high 70’s.

That’s what the pro’s play. Or in football terms, constantly being asked to kick 60 yard field goals, in freezing weather, into the wind. Guess he likes a challenge. He rarely breaks 80, but that’s because he’s constantly playing courses tougher than Bethpage. 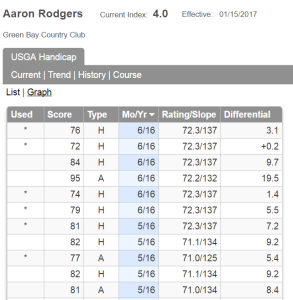 There has to be some correlation to being an elite NFL QB and elite golfer. The QB’s left standing through conference championship weekend this year all keep sub-8 handicap indexes. Big Ben, Brady and Matt Ryan are right there with him.

I tend to think Rodgers' index is the most impressive given he’s getting the least opportunity to play in Wisconsin. His index shows he pretty much only plays in April – June. And if you know anything about golf, you have to be a natural athlete to pick up a golf club right where you left off which he does with ease. 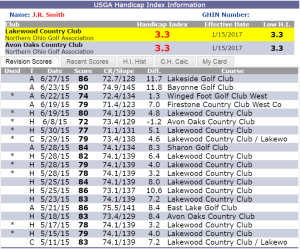 JR Smith has long been making a name for himself before taking the World title to Cleveland this past year. The former first round draft pick is also a member at two local golf clubs in northern Ohio. He started hitting the links a bunch the summer after their loss to Golden State in the finals. But he took a sabbatical after he logged 20 rounds which we imagine helped take his mind off the loss. 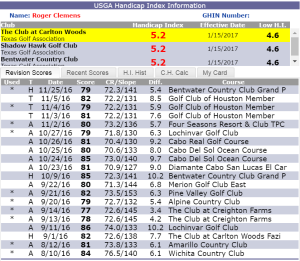 The Rocket is known for playing in the pro-ams on the PGA TOUR. Not only that but he has challenged himself against regular guys like me and you at the Myrtle Beach World Amateur.

Roger is a member at three clubs in Texas and plays enough golf not have to worry about his monthly social dues. He’s posted 83 scores since January 2016. Among those we saw Merion, Pine Valley, Riviera and Pebble Beach. Safe to say he’s a traveling golfer. Not just that, but almost a quarter of his rounds are played in tournaments which means he hasn’t lost that competitive spirit that made him one of the best athletes in the world. At a 5.2 index, I’d be willing to bet he’s taken home a few trophies in his member-member. 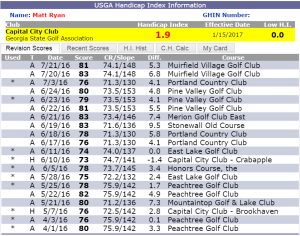 Matty Ice, 2016 NFL MVP, is known for being an avid golfer. His membership at the Capital City Club in Georgia shows a more frequent posting pattern than Aaron Rodgers and other NFL athletes. The Atlanta climate allows him to hit the links January – July, assuming his golf season doesn’t start late due to great performance on the field.

Ryan is no stranger to top tier golf courses. His log includes East Lake, home of the TOUR Championship in Atlanta along with a recent three day stretch at Pine Valley. 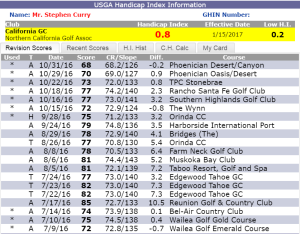 Steph Curry, one-half of the Splash Brothers, one-half amazing golfer. Curry, one of the most popular athletes in the world, plays frequently in the Safeway Open and Reno Tahoe Open and recently teed it up with Tiger Woods and Harold Varner III this past October.

When he’s not dropping dimes on the court he is busy posting sub 70 scores on the course. In fact the last time he played was Halloween at Phoenician Desert in Scottsdale where he shot 68 the day after throwing up 28pts on the Suns the night before. 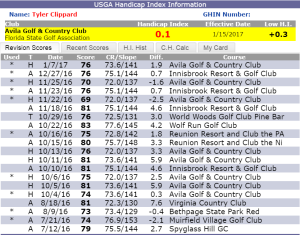 The guy with the rec specs can blow a fastball right past you on the mound but he also hits it a country mile. Clippard, a former high school golfer from Florida, can flat out play at essentially a scratch index.

His golf game is among the best for active ballplayers and he gets to play quite frequently in his home state of Florida. A member at Avila Golf & CC, Tyler plays during the MLB season but much more so in the fall at some great tracks. In his most recent history he’s played Innisbrook, Spyglass, Bethpage and Muirfield Village to name a few. Just a few months ago he posted a 69 at his home club. I don’t think any fellow Yankees will be giving him strokes any time soon.

Okay so Phil is obviously not a MLB ball player. We just wanted to give you a baseline as to what the TOUR players indexes are like. What’s that plus sign next to his index you ask? It means they ADD strokes to his score in a net event. Shooting 66 probably isn’t a good day at your local municipal course for Phil but it’s great that he still keeps an index to help us feel even worse about ourselves.
Bonus!

President of the United States 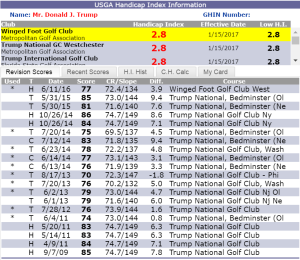 …2.8.. Right, and I’m the Dalai Lama. While I don’t want to speak ill about our current President, it’s rumored Trump maybe isn’t familiar with the rules of golf. Rules like having to putt until the ball is in the hole. Or, whatever that term mulligan is.

Trump is listed as a member at six of his very own courses in addition to Winged Foot. He clearly does not keep up with his index. The Vanity Bagger tagline suits him quite well. We’ll let him have his 2.8 index, because well, he’s the President and I won’t tell him he’s any different. Just don’t take him as your partner in the member-guest unless you’re willing to turn a blind eye or lose your wallet in the process.

So there you have it. Some of the best in the game are actually two-sport athletes. Which ones would you like to tee it up with? Comment on Facebook your dream foursome.