Golf Channel’s hit show, Morning Drive, will be reporting from the World Am during tournament week. Golf Channel will have 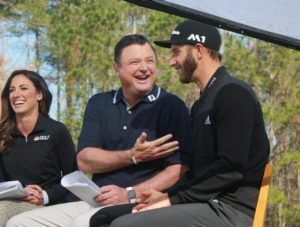 multiple personalities on hand to cover the event and will go live on Thursday and Friday mornings.

On Thursday, Morning Drive will be at Grande Dunes, showcasing the tournament and players trying to win their flight and a coveted spot in the World Championship Playoff.

The Golf Channel stars will move to Barefoot Resort's Dye Club on Friday, where they will broadcast live from the site of the playoff, an 18-hole shootout that will crown the world champion.

Morning Drive will be interviewing players and covering the World Am experience, including the World’s Largest 19th Hole. Make sure you set your DVR before heading to this year’s tournament, because you might be making your national television debut.