Your Handicap, Your Average, And Your Anti-Cap

We all want to play to our handicap in competitions and that is always a goal golfers have in handicap events, but what does this really mean and how hard is it to actually do this?  Our World Am staff has discussed in person, over the phone and in past articles how a handicap is based on a player’s potential to play their best rather than how they play on average. Those of us who are familiar with the handicap system realize that the USGA states that we should only play to our handicap about once every five or six times we play.  If you are playing in a multi-round tournament it should be more difficult to play, to or better than your index in consecutive rounds.  The reason it should be extremely difficult to play to your handicap is simply based on the way the handicap is calculated. 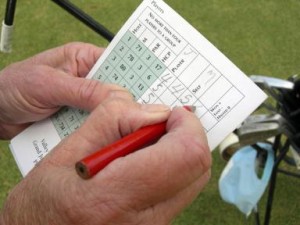 When your handicap index is calculated only the best ten of your last twenty differentials are used to determine your index at the time your revision comes out.  In addition to only using the best half of your scores, an additional percentage is then taken away from that number. So, not only is your handicap not an average of your scores, but it is a number that is actually lower than an average of your best scores.People seem to completely whiff on the idea that playing to their handicap on a given day is very hard to do and is an accomplishment even in a single round.

As a staff we always find ourselves having to talk to players about the difference between their handicap index and their average score as players like to blend the two numbers together.  They also like to point to their highest rounds shot in events and make reference to that round rather than focusing on the low rounds they have shot.

What if we were to look in further detail at a players scoring history and take the worst 10 of their last twenty scores rather than their best 10?  Players like to reference these rounds all the time so let’s actually look at what these bad scores would look like as a handicap index and lets refer to it as an anti-cap.  We can then look at what it would be like to compare our handicap index to both our average score and our worst scores.

Just below is a screenshot of a random player’s handicap that uses GHIN for their handicap service.  You will see how all ten of the lowest differentials (shown as Diff.) have a star showing that the score was used to calculate the 14.5 index.  To get to this number just add the ten differentials up divide by ten (for the 10 scores) and then take 4% percent away from the number to determine the actual handicap index.  When the number comes out to 14.57 you do not round you just drop the 7 for handicap purposes.
USGA Handicap Index Information 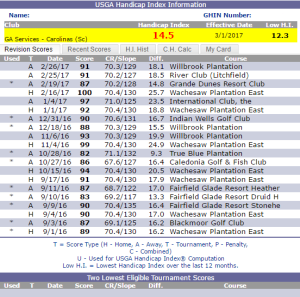 Now if we look at just a general average for the player we would have to take all twenty scores divide by twenty which would give us 17.8. Finally let’s look at how this golfer plays when having bad days to figure out their anti-cap.  Take the players worst ten differentials, add them up then divide by ten and take 4% away to get the anti-cap of 19.6.

As we look this player’s handicap, their average, and their anti-cap we can see just how different the three numbers are from one another.  As we see the discrepancy between the numbers we should realize comparing any of the three numbers to one another may be a bad idea as they are always going to be far apart even for the most consistent golfer.

If this player were to play in World Am they would have to play to their 12.3 lowest handicap index in the last 12 months.  They would have a 14.5 current handicap index with an average differential of 17.8 and their anti-cap would be 19.6.  If this player is able to play better than a 12.3 for three days in a row in a tournament environment, that should be considered pretty wild to say the least and simply should not happen.

Now for the fun part. Go out there and find your lowest handicap in the last 12 months, your current handicap index, your average differential, and your anti-cap.  Share these numbers with us and everyone else on our Facebook page so that we can see the different numbers from a variety of players.  Above is just one random example, but seeing a variety of examples from various handicaps would be fun to see.