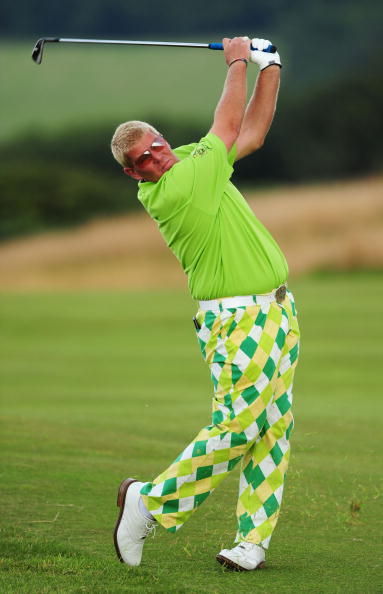 The Myrtle Beach World Amateur Handicap Championship has attracted some of the biggest names in golf and sports, and 2015 will see another superstar attending the event.

Two-time major champion John Daly will be appearing at the World’s Largest 19th Hole on Wednesday and Thursday nights, where he will possibly be serving participants his signature drink, the newly released John Daly cocktail, signing autographs and even playing music on stage in World Am live with members of the Stephen Kellogg band, the official band of the John Daly Cocktail. Daly will also broadcast his one hour Sirius/XM radio show, "Hit it Hard with John Daly" from the World Am.

Daly, one of golf’s most popular figures over the last quarter-century, will join Annika Sorenstam, David Feherty, NASCAR legend Jeff Gordon and Major League Baseball great Roger Clemens, who played in the event three times, among the big names who have been to the World Am.

Daly burst on the golf scene in 1991, winning the PGA Championship in a runaway after getting into the event as the ninth alternate. The Arkansas native endeared himself to golf fans with his humble upbringing and swash-buckling game, making him a perfect fit for the World Am, which is often referred to as the Everyman’s U.S. Open’s.

Daly solidified his place in the game’s lore with a playoff victory over Constantino Rocca at The Open Championship at St. Andrews in 1995, making him one of just 35 golfers to have won at least two majors.

The John Daly Cocktail, which comes in three signature flavors, will be the official cocktail of the World’s Largest 19th Hole, giving golfers the chance to “Grip it and Sip it,” each night of the tournament. The three flavors are Sweet Tea & Lemonade Vodka, Peach Tea & Lemonade Vodka and Raspberry Tea and Lemonade Vodka.

Daly will join television personalities Charlie Rymer and Win McMurry and the Katrek and Maginnes On Tap radio show, which will be broadcast live from the main stage on Sirius/XM radio, as headliners at the 32nd annual World Am.

The John Daly Peach Tea & Lemonade is just a cut nine iron from the original with a hint of natural peach flavor. You’ll think we’ve pillaged the trees of Georgia with this tasty libation. No matter the season… no matter the time of year… no matter if the famous Azaleas of Augusta are in bloom or not.

The John Daly Raspberry Tea & Lemonade is another fluffy cut from the original, fading in a hint of Raspberry essence for a taste unlike any other.

Participants will receive an "individual sized" 200ml bottle of the drink during registration and it will be served at each of the full service bars inside the World's Largest 19th Hole.

The 32nd annual World Am will be played August 31 through September 4 on more than 50 of Myrtle Beach’s best courses. The event is again expected to attract 3,400 players from all 50 states and more than 30 countries.

The 72-hole net stroke play tournament relies on the game’s most rigorously enforced handicap system to level the field for every man and woman that plays in the event.