Maryland Golfer Hopes to Finish the World Am Where He Started 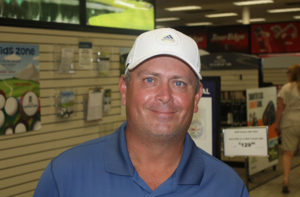 Bret Lewis drove approximately eight hours from Germantown, Md., to participate in the World Am, and he hopes to finish the 34th annual event the way he started it – first.

Lewis was the first person through the line during registration for this year’s tournament, arriving at 8:30 a.m. and enjoying the conversation before leading his fellow players into the Superstore.

This will be the third-time Lewis has played in the event since a buddy won a trip in 2015.

“(World Am reps were at a golf show) in DC and one of my buddies, who is a very good player went and he won a hole in one contest and a trip for two,” Lewis said. “I won it the next year and we’ve been coming back ever since.” The factors that bring Lewis and his friends back are what attract so many people to the World Am. “I like the competitiveness of it,” he said. “We all play tournament golf and we all try to do our best, and it’s nice to meet other people. I have played with a friend who I met from California, Justin Mullinax, all three years.”

Lewis, whose best finish so far is a top 20, enjoys nightly trips to the World’s Largest 19th Hole as well, but with a golf course lineup of Tradition Club, World Tour, Farmstead and the Moorland Course at Legends, he hopes to make a run at the World Championship Playoff.

A golfer since 1985, Lewis is no stranger to Myrtle Beach, and he has a favorite place to play and eat, both along the South Strand.

His favorite place to play: Caledonia.

Following a round at the South Strand beauty, Lewis recommends dinner at Dead Dog Saloon, which is located along the water on the Marshwalk, providing beautiful views, good food, and nightly live entertainment.