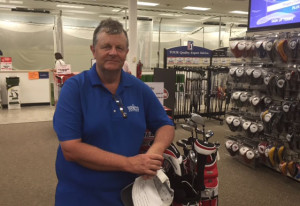 He saw a link on a website encouraging him to play in the Myrtle Beach World Amateur Handicap Championship, which is only 10,752 miles away from his home in Adelaide, Australia, and thought, why not?

Kay signed up for the World Am on what he called a flight of fancy (no pun intended) in 2013, and the traits that have made the World Am so popular domestically – competition, camaraderie and great golf - have continued to bring him back.

He met Frederick Steele from Atlanta that first year and the two struck up an immediate friendship. After a 34-hour flight from Adelaide to Brisbane, Queensland, Los Angeles and Atlanta earlier this month, Kay stayed with Steele and the duo drove to Myrtle Beach (there’s an itinerary few, if any, in the 32-year history of the event can match!).

But the travel is hardly an impediment.

Kay has embraced the entire World Am experience.

“It’s getting to play golf on really good courses, meeting all the new guys, and the 19h hole is just unbelievable,” he said about what brings him back to the tournament. “You can’t argue with the Atlantic Ocean on your doorstep and 100 golf courses … It’s a beautiful place.”

Despite his best efforts, Kay is still working to convince a fellow Aussie to join him.

“I’ve said to all of them, ‘you need to come with me’ and they’ve said, ‘oh, no, that’s to far,” Kay said of trying to bring his countrymen with him. “But one of them might be coming next year.”

In the meantime, Kay, who has traveled longer and further than anyone else in the field to get here, will enjoy the 2015 event.