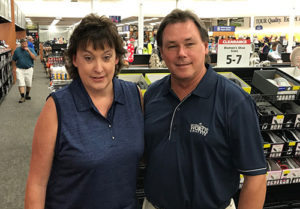 It was 1987 and recently married Nick Martin was traveling for work when his wife decided to browse through the pages of an issue of Golf Digest that had arrived in the mail.

The Martins had yet to take a vacation together but with an improving financial situation, Jennifer was ready for a trip, and she noticed an ad for a golf tournament in Myrtle Beach.

“I’m in the hotel room and Jennifer called me and said, ‘there is this tournament in Myrtle Beach and it sounds like a perfect vacation for us,’” Martin said. “She said, ‘I can go to the beach and you can play golf.’”

Thirty-one years later, the World Am is as much a part of the Martin’s calendar as Christmas. Friends, family and work know they will leave Nashville behind for 10 days in Myrtle Beach the week before Labor Day.

“It’s an event we look forward to every year and we aren’t going to change it,” Martin said. “At some point, my wife and I will have spent a year of our lives here because of this golf tournament.”

Martin has played in the World Am for 31 consecutive years and has accumulated more than his share of memories, including a 1993 trip to the World Championship Playoff. He was paired with Jim Low, who was battling health problems but made quite in impression that day at the Dunes Club.

“He was eat up with cancer and knew he wasn’t going to be around that long,” Martin said of Low. “The guy drank a beer a hole and you couldn’t beat him. He hit five iron down the middle, five iron to the green. All I could do is clap and say, ‘give me a beer too!’ I signed his scorecard and he won the whole thing. That was neat.”

One year, Martin got pulled over by cop, who felt he had cut him off. When Martin explained that he didn’t realize he had cut him off, and he mistook the police car for a cab to begin with, the man in blue wasn’t amused. But Martin got off with a warning, he recalled with a laugh.

While Martin would relish the chance to return to the World Championship Playoff, the tournament is much more to him than a chance at victory.

“(We have) established relationships with people from those early years, and we’ve made some of our best friends (at the tournament),” he said. “It’s like a high school reunion every year. By the time we get to (registration) people have called and we are texting about getting together for dinner or a practice round.”

Over 31 years and 300 days, the Martins have enjoyed a lot of practice rounds and dinners with friends at the World Am.