One of golf’s fastest rising personalities, who is also an aspiring LPGA professional, will be appearing at this year’s Myrtle Beach World Amateur Handicap Championship. 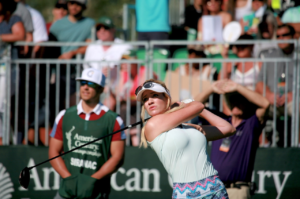 anac, a social media star who has been featured by nearly every major golf media outlet, in addition to working with brands like Callaway and Topgolf, will appear at the World’s Largest 19th Hole on Tuesday and Wednesday nights of the tournament.

Spiranac will share the story of her rise from anonymous collegiate golfer to celebrity – an ascension powered by the discovery of her Instagram account – from the 19th Hole mainstage, and she will be in a selfie station both nights posing for pictures with players.

The San Diego State alum, who is working to earn her LPGA Tour card, has made the growing the game and combating bullying – online and off – a priority as she continues to work toward her dream of playing golf for a living.

Spiranac took up the game late, relatively speaking. She was training as an elite gymnast with a goal of making the Olympics before a broken knee cap derailed those dreams at the age of 12. Her departure from gymnastics led to golf, where she quickly rose up the junior ranks, earning a spot on the San Diego State golf team.

She went on to become a team captain a SDSU and earned multiple All-Mountain West Conference honors.

Spiranac will join Charlie Rymer, Damon Hack and Chanel McCabe from the Golf Channel among the celebrities at the 34th annual World Am. Billiards legend Ewa Mataya Laurance will also be on hand, and the Katrek & Maginnes On Tap radio show, which airs nationally on PGA Tour Radio on Sirius/XM will be originating live from the World’s Largest 19th Hole again this year.