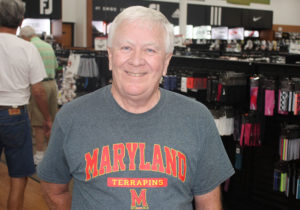 Jim Mullaney is playing in his sixth Myrtle Beach World Amateur Handicap Championship, and his most vivid memory of the event brings a smile to his face, along with the slight grimace of a man who learned a lesson the hard way.

A native of Dunkirk, Md., Mullaney made the first and only ace of his golf career on the par 3 10th at the Hackler Course. He struck a perfect 7 iron from 135 yards and watched the ball disappear into the cup in his second appearance at the tournament.

He has been committed to the event as well, bringing friends with him along the way, but he is particularly looking forward to this year’s tournament. Just four months removed from a total knee replacement, Mullaney has been playing 3 to 4 times a week in hopes of making it to the World Championship Playoff.

Either way, Mullaney and his wife will have a good time.

“My bride and I, we go to the 19th Hole and run around,” he said. “The cocktails are free and we have the ballroom for dancing. We do the whole thing … It’s just a lot of fun. I love golf and hopefully (I’ll play) a fifth day one of these years.