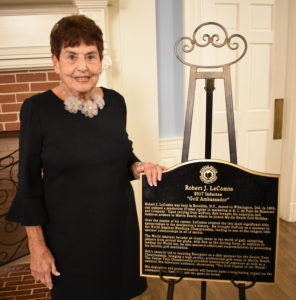 Robert LeComte's family were among the many guests in attendance at yesterday evening's Myrtle Beach Golf Hall of Fame induction ceremony held at Pine Lakes Country Club. One of two inductees this year.

In 2013, LeComte received a new World Am lifetime achievement award named in his honor. It was his achievements over the decades prior that led to this evening.

Robert J. LeComte was born in Brooklyn, NY, moved to Wilmington, DE in 1955, and enjoyed a productive 37-year career in marketing at E. I. du Pont de Nemours and Company. Upon retiring from DuPont, LeComte brought his expertise and business acumen to Myrtle Beach, where he joined Myrtle Beach Golf Holiday.

Over the course of his career, LeComte created the two most significant title sponsorships in the destination’s history. He brought in DuPont as a sponsor to the World Amateur Handicap Championship, leading to one of the longest title-sponsor relationships in all of sports.

With LeComte as the driving force, the World Amateur became an iconic event in the world of golf, attracting players from around the globe. In addition to leading the World Am, he also assumed additional responsibilities in promoting his favorite golf destination.

LeComte’s dedication and professionalism will forever have an impact on the community he cherished and the game he loved.

About the Myrtle Beach Golf Hall of Fame

The Myrtle Beach Golf Hall of Fame, created in 2008 to recognize those who made historic accomplishments and lasting impressions on the Myrtle Beach golf industry. A committee annually selects new members based on nominations. Visit themyrtlebeachgolfhalloffame.com to learn more.