For Thomas Berry, 2017 World Am is a Trip of a Lifetime 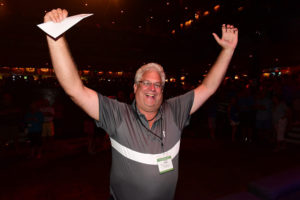 Thomas Berry hadn’t played in the World Am in nearly 15 years, but his return to the event was an unqualified success before he stepped foot on the tee Monday morning.

At the World Am’s annual Welcome Party, tournament director Scott Tomasello gave away, among several other prizes, lifetime entry into the World Am, and Berry, to his amazement, had his number drawn.

“Outside they (called the numbers) nice and slow, one number at a time,” Berry said of hearing his ticket being called in the House of Blues courtyard. “When they pulled the last number out, I screamed and everybody high-fived me. It was great. I don’t care what happens the rest of the week, I’m good to go.”

Berry enjoyed the event when he played just after the turn of the century, but work and travel made consistent participation difficult, problems that were remedied by a move to Brunswick, Ga., and a chance meeting last year.

“I joined the Golf Channel Am Tour (in Georgia) to play local events and first day I played, Paul Baker was in my group and he was talking about the World Am,” Berry said. “I said, ‘I used to play in that; maybe I’ll come up this year.’ I used him as my referral and we came up together. That’s what started me coming back.”

What Berry is unlikely to do in his return is sacrifice his enjoyment of the event for on-course intensity.

“I’m not that cut throat,” he said his demeanor on the course. “It’s for fun and enjoying the guys I’m playing with, and it will be that way this week.”

It will be that way World Am week for the rest of Berry’s life.