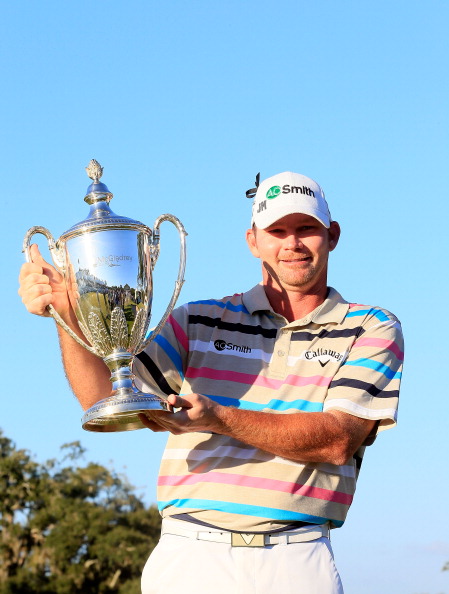 The Myrtle Beach World Amateur is the largest single site golf tournament in the world. As part of that, the nightly party known as the "World's Largest 19th Hole" is the largest golf PARTY in the world. Over the years, the 19th hole has attracted some of the biggest names in the game of golf and beyond, including Annika Sorenstam, Jeff Gordon, John Daly, Roger Clemens, David Feherty, Brandel Chamblee, Charlie Rymer and many, many more. This year will be no different, with Rymer, Brian Katrek and John Maginnes already scheduled to return, the World Am is excited to announce the addition of PGA TOUR winner Tommy Gainey to the 19th Hole guest lineup. Gainey won his first PGA Tour event at the McGladrey Classic in October of 2012 by shooting a final round 60. He is also a two time Web.com TOUR winner and the champion of Big Break VII on the Golf Channel.

Tommy "Two Gloves" will be at the 19th Hole on Tuesday, August 30 to share stories of his time as a Pro and the unique road he took to get there. After working as a line worker for A.O. Smith in his hometown of Bishopville, South Carolina, Tommy was able to qualify for the PGA TOUR through Q-School and eventually win on golf's grandest circuit. Tommy's conversations with Katrek, Maginnes and Rymer will undoubtedly be some of the most intriguing in the history of the World Am. It should be fun!

Okay, so in the midst of the open bar, free food, live music, celebrity guests and tons of golf games...what has been missing all these years? A MECHANICAL BULL!!!! That's right, we're bringing in a bull, so you can challenge all of your friends to see who can stay on the longest. Or you can just watch your fellow players make a fool of themselves. Either way, this will surely bring some new excitement and competition to the 19th Hole floor. Its just 8 seconds...can you hold on?

More information on the World's Largest 19th Hole will be out soon. In the meantime, check out these videos from last year to get your taste of what this tournament is all about!