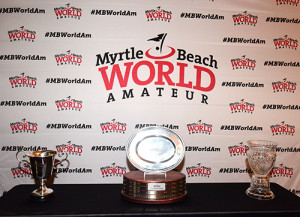 Seventy-seven flight winners, including ties, had advanced to the championship playoff at Barefoot Resort’s Dye Course. Tournament organizers altered plans in hopes of getting the round in, having players tee off in an 8 a.m. shotgun start.

“It’s disappointing that we were unable to complete the World Championship Playoff, but overall it was an outstanding week for the tournament,” said Jeff Monday, Myrtle Beach Golf Holiday’s tournament director. “We owed it to our flight winners to give it a go today, but Mother Nature had other ideas. We weren't able to identify a single World Champion, but there were a lot of winners at this year's tournament. We had more than 3,000 people from across the globe competing on Myrtle Beach’s best courses and the World’s Largest 19th Hole was at it’s absolute best.”

“The week was fantastic,” said Max Gregory, who won flight 32 and played in the canceled Flight Winners Playoff. “This morning I went out in the driving rain and parred No. 8. I feel like a winner. I feel like all the [tournament staff] did a great job doing the best they could to to get us out and give us that chance.”

The World Am instituted the Flight Winner’s Playoff in 1986 and this is the first time the round was unable to be completed.