Why My Handicap is Inaccurate

I always try to play well (but not always my best), I post (pretty much) every round and I play by the rules (for the most part). Those qualifying, parenthetical statements are what make my handicap index inaccurate. The USGA Handicap System has two underlying fundamentals that must be true before any calculations take place: 1) That each golfer attempts to make the best score on every hole they ever play, and 2) That every acceptable round of golf is posted to that player's handicap.

One day soon I'll get even deeper into the inherent flaws of the system and the different ways we (as inherently flawed humans) can mess it up. But for now I'll just touch on a few of my shortfalls on the course that make my handicap index inaccurate from the jump. Trying your absolute best on every hole of every round is an impossible task for me. I've never played competitive golf, never had a lesson and never shot better than 83...anywhere....ever. I play about 12 - 15 times a year, most of which are recreational rounds with my brother, co-workers or friends. Some of those rounds are with Golf Writers or Tour Operators as part of my job. Side bets for lunch or a good Wolf game keep me interested for the most part, but I tend to lose 100% focus at different times throughout the round. In other words, my "care-o-meter" gets low sometimes. I enjoy the game of golf, but I abhor slow play. That makes me play faster most of the time and playing fast takes the place of playing well in my order of importance.[youtube id="sH_pPBWss7Q" align="left" mode="normal" maxwidth="300"]

How does this affect my handicap? I have no idea. I honestly don't know because I have never played golf in my life when it actually matters. I'm not sure how much better or worse I would play over the course of 18, 36, 54 or 72 holes in an event of any actual significance to me. I would like to think that spending a little more time on pre-shot routines, getting the correct yardage and reading greens would result in fewer strokes each round. I'm also not naive enough to think that nerves wouldn't come into play and cost me a few strokes as well.

And then there are the Rules of Golf. I don't move or touch my ball unless it is picking up mud, so playing it down isn't an issue. I don't take many gimmies, so putting out shouldn't be a problem. I always count penalty strokes and the only mulligan I take during a round is the "breakfast ball" off the first tee if I need it (I forgot to mention I never...ever warm up on the range). The only major differences for me would be stroke and distance penalties. I think stroke and difference is one of the worst rules of golf, and I take my stand by rarely using it. If I know my ball is OB when I hit it, I'll hit another one. But if there is a chance its up, I'm going to have a look and then I'm dropping one where it crossed. I know this only hurts me in the long run, but I'm not challenging any course records, so I'll take the hit on my handicap index, save a few minutes and move on. 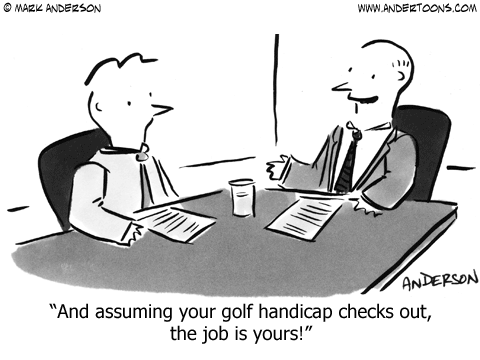 So, my best guess is that with a little more focus, warm up and general round management I would probably shave a few strokes off during a tournament. However, I'm not convinced that over a two or three day period that I would avoid the major mistakes that would inevitably ruin any chance at competing I would have. What I do know is that my incoming USGA Handicap Index is not an accurate reflection of my playing potential for any tournament round anywhere. I know that because the rounds that I play throughout the year are in a completely different environment and I have a completely different mindset throughout all of those rounds. The handicap system only works if you play with the same determination and focus EVERY HOLE and that you genuinely attempt to make the best possible score on EVERY HOLE. I can definitively state that I don't do that, and that is the main reason why my handicap is inaccurate.