World Am is a Family Affair for the Swopes’ 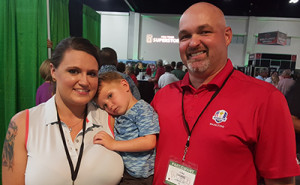 For first time, World Am participant, Jared Swopes, it's not only about the golf, it was time for a getaway with the family and the golf is turning out to be a bonus. The Lubbock, Tex. resident had planned on playing in his first World Am last year, but when it didn't materialize, he made sure 2016 would be the year.

"I listen to (Brian) Katrek and (John) Maginnes on (Sirius XM) PGA Tour Radio and they were broadcasting from here, and I had to look into it and now I'm here, and it's awesome," stated Swopes who made the trip from Texas with his wife Megan and his young son, Jameson.

While the World Am is a "Buddy Trip" for many, for Swopes, it's turned into a family vacation. The Swopes have visited the beaches and have been enjoying meeting fellow competitors in the World Am. Swopes says he's lucky that he has the opportunity to play golf on a regular basis and this week he is in Flight 5.

The first day was a little rough as he shot a 91, but the Golf Gods turned a bit kinder on Tuesday as he shot an 83 and was able to calm his nerves a little.

Megan and Jameson on the other hand have been visiting some of the hot spots in town.

Swopes plays out of the Lakeridge Country Club in Lubbock when he isn't running his automatic door company (think revolving doors at hotels and airports). Swopes says his family looks to plan a beach vacation each year that give him the opportunity to play golf. In recent years, they have visited spots in the Caribbean and Mexico, but they say Myrtle Beach ranks right up there when it comes to golf and things to do.

"I thought I was serious about the tournament, until the first day and I saw there players," admitted Swopes. "There are some good players here and I'm just happy I can experience it for myself."

Swopes said he would recommend the "World Am Experience" to his friends back home and he can foresee one of two of those families venturing to Myrtle Beach in the coming years.

"Most of the guys I play with are younger than me and they would love this. They may not know about it now, but they will when I get back."