Your Golf Cost of Living

The most common statements I get at our smaller tournaments regarding perceived inequity in handicaps is "But you have me playing from the seniors tee and my handicap is established from the mens," or "I can't compete against those guys! They get to play a 400 yard shorter golf course!"

I'm here to explain why those sentences mean nothing to me.

I also hear the concern of "My home course is supremely easy/difficult so my handicap is much higher/lower than it should be so!".

I'm here to explain why that sentence should mean nothing to you!

A handicap index is defined as portable.  A number that can be relevant in any language or place (or golf course). Hence why we're able to host over 30 countries at the World Am yearly! So what does that mean exactly? Allow me break it down in terms that are more relatable.

Picture a yearly salary for four people who hypothetically have the same job for the same company. Each makes a different amount of money in a different area of the United States.

We can reason that each of these people have the same standard of living given their salaries in relation to their cost of living.

Now let's substitute cost of living with course difficulty and salary with course handicap. We call this your "Golf Cost of Living".

Notice the correlation? Scott probably shoots in the 90's.. the worst of the four, but his salary was the highest. A high Golf Cost of Living correlates to a high course difficulty. Groceries, housing, and electric are the golf equivalent of fast greens, deep bunkers and high rough. Yes he shoots higher scores, but he has a higher Golf Cost of Living. So in reality, the four couldn't be more alike.

Say Company ABC says they're shutting down each of those four offices and they'll be consolidating all offices to Myrtle Beach, SC. As part of the deal ABC tells their employees their new salaries will all be $63,000 based on the cost of living in their new hometown. Danny is going to make less while Brenda is due for a 'raise'. But, we know it's not a raise. She's going to need more to survive just like Danny will need less.

Take a look at the two players below. Both are 15.5 indexes. Scott is a 40 year old male who plays the mens tees while Danny is 60 and plays the senior tees. They play entirely different golf courses than each other. 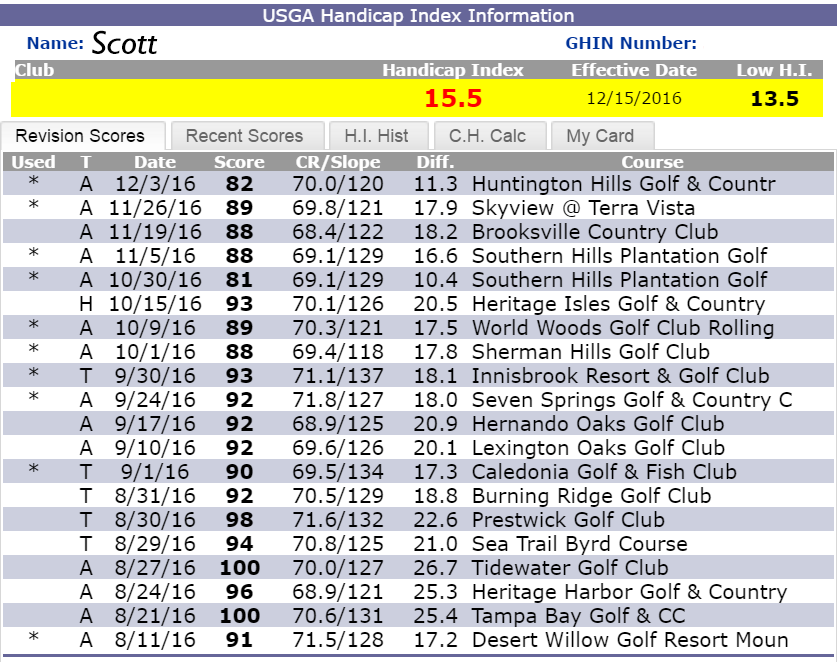 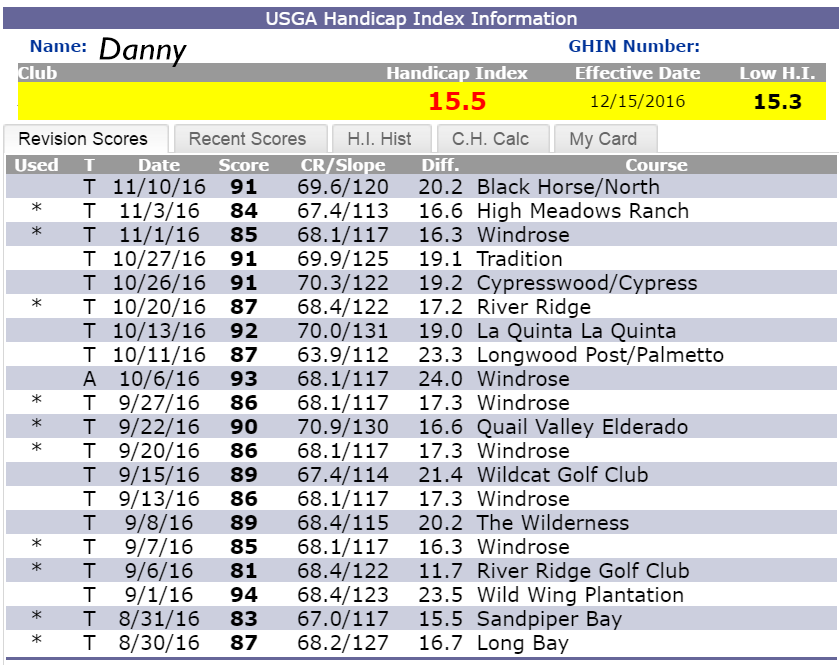 If we compare their last 20 scores we see the average of Danny's best 10 scores is 85.4 while Scott's average is 88.3. Because Scott 'lives in NYC', and thus has a higher Golf Cost of Living, his scores are much higher than Danny's. Yet at the end of the day they are identical in their personal standard of living.. or rather, their golf handicap index. 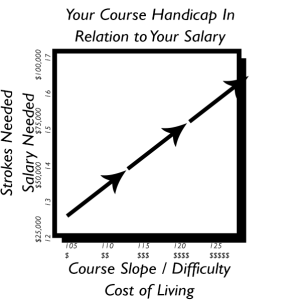 Most people will assume Danny will beat Scott due to their scoring perception but if you placed them on the same tee box (in the same city) they'd have an equal chance to compete.

The guys in the office tell me I'm awful at creating analogies and quite frankly I don't disagree. However, this one is pretty easy to relate to.  While I'm at it, how about a few other things in your life that are portable just like your handicap index.

Your BMI index, your BAC, your credit score. Often times you have no idea how it was figured. You throw a whole bunch of ingredients in a pot and out came a number. But the experts of each know exactly what your number means without seeing who you actually are as a person.